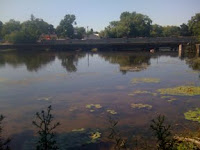 The weather has been great during the month of July....well for those of you like me who think 85 degrees along with humidity is great then it has been a great month. I wanted to try my new Elecraft AF1 filter in a contest/portable situation. This morning the IOTA and U.S counties QSO party was up and running. I always find that doing portable op's when big contests are on makes things very exciting. The only problem I had in the past was the Elecraft KX1 was not good at filtering out the busy bands. Thus brings me to the Elecraft AF1 filter!! The day began with me making 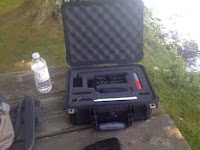 sure all was packed (Murphy decided to participate in those plans). It was off to Starbuck to have a coffee and get the laptop out (Starbucks has free wifi) and look up the contests that are on and get the exchange's they are using. I was going to be a "point giver" in as many contests as I could. So once at Starbucks Murphy kicked in.....I had all I needed for my portable operation but forgot my laptop!!!! Well the Iphone came to the rescue and I was able to get the contest info from there. So it was off to the park and I did find the perfect spot to setup at around 10 am. It was still cool but just to make sure this spot was under a large tree with


lots of shade right beside the river.  It was time to take a picture of the setup. Got the camera out and it just would not take a picture...I charged  the battery last night....hmmm...upon further investigation I forgot to put a memory card for the camera.....another Murphy moment....Well the Iphone came to the rescue once again so the pic's in this post are done with my Iphone.  I camped out on 20 meters and it seemed to be more alive with the IOTA contest than the QSO party contest. The noise level was amazing at almost "0" . So how did the AF1 work out...I found the connecting cable between the KX1 and AF1 being not shielded  was picking up the RF from the

Miracle whip antenna at 1.2 watts. I am going to have to make up a shielded jumper cable to see if that makes a difference.  I was still able to use the AF1 and it really did help with busy spot on the band. I am going to have to play with it more at home sorting out adjustment issue's along with it picking up RF from the Miracle whip antenna. When I got home I did try the KX1 and  AF1 along with the DX-EE in the attic and there was no issues at all with RF getting into the unit. N4LN        14.082mhz 400 miles with 1 watt.
So that was the extent of my contacts as it seemed even though 20 meters had a very low noise floor the band seemed to be not favoring my location and low power. The strong signals had large pileups and the stations close to the noise floor were just not hearing me. So it was time to head home around noon and get the jumper cable sorted out and get this blog post up and live.
Posted by VE9KK at 4:11 PM