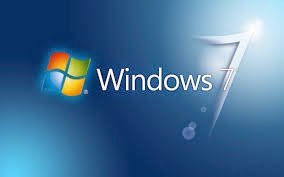 It was time to take the plunge and load Windows 7 on my PC, there were up's and downs to both the preparation to the loading of Windows 7 and also during the loading of 7. I had an external hard drive and decided to use it to help out in the Windows 7 transformation.
I used the external hard drive for the following:
1. Moved all files such as word documents to their own files.
2. I took screen shots of all ham radio programs setting pages to aid in the new set up of each program.
3. I moved my downloads folder which contained most if not all of my programs.

Once that was done it was time to say good bye to Windows XP and hello to Windows 7. The first step was to have my PC boot from the CD player and not the hard drive. It was off to the bios and make a "simple" change……as Windows loaded I was instructed to push the Del key for bios access. That just did not work I then tried F2, F10 and so on and after about an hour I gave up. To make a long story short it boiled down to the fact that my USB keyboard was plugged into a USB hub. The hub loaded once Windows started to load thus not allowing me to get into the bios page. I plugged the keyboard into the PC and I was into the bios with one press of the Del key!!
So it was off to change the boot sequence…….once I navigated my way there I found NO CD player listed!! It's hard to boot from a CD player that is not listed in the boot sequence.  And again I say "to make a long story short" It was my fault I was looking in all the wrong places in the bios. The CD player was found and it was changed to the number one spot in the boot order. With that done it was time to load Windows 7. A nice thing with Windows 7 is it will allow you to either load over Windows XP (not what I want to do) or a fresh install which was what I wanted to do.  The first time around for some reason I installed over top of Window XP…..I had to start over with the install! This time I wanted to watch over every step and make sure a clean install happened. So what could go wrong…..well……I was able to get Windows 7 start a clean install and I was warmed the PC would restart several times.  During the first restart a message came up to press the Del key,  I did what I was told and the install started allover  again! Now I seem to be in a loop but it turns out that I should not had done what I was told to do and the instruction to press the Del key would time out and the install would continue. Windows 7 is now up and running and I am now in the process configuring my radio programs……that should make for some interesting future posts…..:)