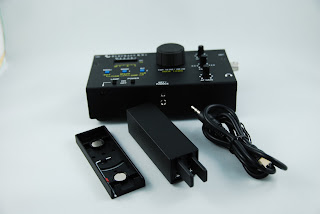 Back in early October I was looking for a portable Morse code key for my Elecraft KX1. It came down to a toss up between the Bengli Traveler or the Palm radios mini paddle. There was a large price difference between the keys but what made my mind up was the emails and feedback I received about the mini paddle.
So the Mini palm paddle won the Oscar and was chosen. It seemed to be a nice size and from the measurements would fit in my Pelican carry case were as the Bengali key would be to large and it was  a  heavier key as well. The original plan was to have the palm paddle as a stand alone key but as we all know plans change....I began to think about  mounting it on the KX1. This would mean some changes to my storage plans as well as some additional thought had to be put into where and how to mount the key to the KX1. As I looked at the Palm paddle and the KX1 the only place it seemed to fit was the left side and just ahead of the D.C power connection. The right side space was used up with the headphone jack and  antenna hookup. The plan now was  to go  the hardware store to pickup some 4/40 nut's bolts and washers to mount the key to the side of the radio. As I said earlier "plans change" While at the hardware store I was directed to a two side tape called No more nails. The tape is good to -40 C to +120 C, water proof and virtually sticks to just about anything. Using the tape meant there would be no drilling in the side of the KX1. The base of the Palm key adhered with the tape very well to the side of the rig.
In the future if need be the base could be removed from the rig and I would not have extra holes to deal with. The tape seem so far to work excellent. The directions say it takes 24 hours for the two sided tape to fully cure. I made sure the Palm paddle base was placed so it would not interfere with the DC port. When not on battery power I am able to plug a DC cord in. The only downside to the Palm key I could find was the cable end that plugs into the back of the Palm paddle. To me if you were plugging and unplugging it after each use. As well coiling it up and storing it in a case after each use I feel the connecting pins had a good chance of getting damaged. For this reason I decided to make the cable a permanent connection to the rig and paddle. This would solve the installing and removing of the paddle connector and possibility damaging it.  To accomplish this the connecting cable had to be shortened so I removed the connector at the opposite end and soldered in a 90 degree connector that would make the permanent paddle cable more streamline. For some strange reason most pre-wired paddles the right paddle is dit and left is dah....well I'm the opposite so while soldering the 90 degree connector I also reversed polarity. ( something I have become very good at doing) The paddle base gave me enough room to train the Palm key cable under theKX1 from front to back of the rig.
This allowed the radio to still sit flat even with the key cable under the radio. With the two sided "No more Nails" tape holding the Palm key to the side of the KX1 the paddles slide in and out of the housing very smoothly. This is great for storing the rig and key in a carry case as the key is well protected. I had just a short time to try the paddle and see how it preformed. I was very impressed that no adjustments were required and my main concern was put to rest as soon as I started to use the key.....it is very very smooth. While working on the radio I did find some exposed wires on the battery connecting cables of the KX1. Some heat shrink gave a fast that problem a fast fix.