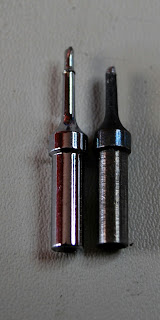 Last weekend I was working on my Elecraft K2 project all was going well until I tried to clean my Weller soldering tip in the wire sponge. For some reason it the wire sponge was not letting the soldering tip go. It was as if the tip was soldered to the sponge that was supposed to clean it! I did free the tip from the sponge and I tried to clean the tip once again and the same thing happened but it was even harder to remove from the wire sponge. I then took a closer look at the Weller soldering tip and half the tip was missing, it seemed to have come off. I never had this happen in the past with these tips and of coarse it was this tip that I did not have a spare of. I did pick up some new tips (4 of them) and will now be able to continue with my Elecraft
K2 project once again. At one point I was using just a sponge that was damp to clean the tip's but I found this cooled the tips down and the soldering was affected. Has anyone out there ever had the problem of the soldering tips dissolving or breaking off in the wire sponge? The temperature on the Weller WES51 is set to around 800.
Posted by VE9KK at 6:13 PM