Last weekend  I participated in the CQ WW CW contest and in a post just before the contest I shared some things I included and avoided regarding contests.  One would think that because it's my list and I was "preaching" about it on my blog that I for sure would be one to follow it.........WRONG and boy did I pay for it!! The contest was going along just fine the propagation was great, 10m was wide open and my QRP signal seemed to be getting out just fine. Now this being a CW contest and a world wide one at that I found the CW was being sent as fast as a bullet.  To copy these fast calls was taking more time than I wanted to
spend,  but the stations were much needed multi's or possible DXCC's. In the past this is were my trusty Elecraft K3 has helped me out. The K3 has the ability to copy code and scroll it at the bottom of my Elecraft P3.......but it was not happening and no matter what I adjusted I could not get the rig to read the code.
It was at this time I started to wonder from my own advice........the downhill slide began with a question on the Elecraft reflector regarding my decoding troubles. The common answer that came back was that the latest firmware for some reason did not allow the decode to work. I was advised to download and install the latest BETA firmware (note....Beta firmware downloads are not as simple as production firmware releases) and all would be well. The slow downhill slide was gathering speed when I downloaded the Beta firmware to my PC's desktop. It sat there for some time as the dark side started to take a more firm grip on me!! I then unzipped it and say it ain't so but I began to download it into the Elecraft K3. 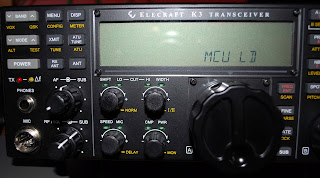 The red transmit light started to blink, the LCD screen went dark with a jaw dropping message MCU LD (LD meaning SOMETHING IS UP). In a dark empty space in my mind I heard my own advice "never update  your radio's firmware before (or during) a contest" I have done countless firmware updates and all have gone smooth.....but during the CQ WW CW contest NOT!!! So back to the Elecraft reflector and search the archives for hopefully the answer.  The answer was found and after an hour of @#$%%& and more #@*&& the K3 was up and running  and I was back in the contest and might I add
I HAVE LEARNED MY LESSON.........well until next time.......:)
Posted by VE9KK at 4:47 PM