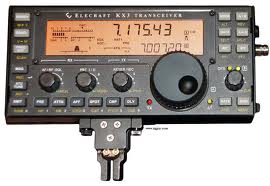 Wayne N6KR co-owner of Elecraft has posted the results of the KX3's operation during it's Field  day debut on the KX3 Yahoo group site.

Wayne writes..........
The K6SRA group put on a great show, with excellent antennas, even
better food, awesome views of the surrounding values (from 2400'
elevation), and perfect WX. That along with the beer, acoustic guitar,
and one at-large 6-year-old made it a very memorable Field Day. The
only thing that didn't go according to plan was the half-dozen
astronomy buffs and their vehicles, which colonized the perimeter from
about 9 PM till 3 AM. We had to dim our lights to be good neighbors.
Then they left, waking us all up. But I did get a peek at Saturn,
rings and all.

The KX3 was a big hit among operators and visitors. Lots of questions
and photos.

We put it in one of the 100-W operating positions, where it stayed for
more than half the contest, after which it moved around a bit. With
the internal battery and attached paddle, we were able to "patch it
in" on short notice. I even made one hand-held FD contact using a 4'
whip on 20 m.

I wasn't keeping count on contacts, but at 5 watts search 'n' pounce,
we were working most stations on one call in CW mode. We made a lot of
SSB contacts, too, with of course a bit more effort. One of the ops
was successfully running JT65 on the KX3 for awhile.

All of the features we had implemented so far worked really well.
Operators took only a minute or so to get oriented (it's a bit simpler
to use than a K3 :) I had to barter with snacks to get the KX3 back
once someone had started using it.

The KX3 has very low phase noise and virtually no key clicks, thanks
to the DSP keyshaping, so we didn't bother any of the other rigs
(especially at 5 W). We were impacted at times by the two 100-W
stations since all of the site's antennas were within about 20 feet of
each other, putting us directly into their near field, where we may
have been seeing multiple watts of RF at the KX3 in RX mode. (I'm
going to try to convince them to space the antennas out by 100' at
least next year.) We're going to use the data from this experience to
enhance the "Field Day Mode" protections in KX3 hardware and firmware.