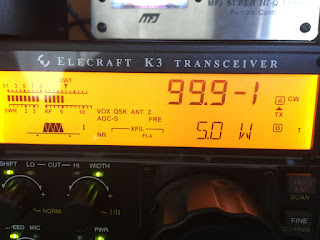 The other evening I had an opportunity to get on the air it has just been to long and I was very excited about spinning the dial around the HF band! I ran the coax out to my MFJ 1788 on the balcony and fired up the K3. I jumped on 20m were not to much was happening but on 30m there was some Dutch DX that was calling CQ so I thought I would give them a go. Prior to calling my SWR on the loop antenna was tuned to 1.2:1 BUT when I started to call the Dutch station my SWR readout on the K3 magically became 99.9:1!!! It was like the coax had been removed from the antenna and was sitting on the ground. It was late so I wanted to look into this at a later time, this evening was the later time so I hooked the antenna up and gave 20m a go and the SWR once again on the K3 was showing 99.9:1. It was time to trouble shoot, was it the coax, MFJ 1788 antenna, the K3 or my LDG antenna switch? The first thing I wanted to do was to remove the antenna as the problem.
I removed the coax from the antenna and in it's place put a 50 ohm dummy load. In a way I was relieved to see the 99.9:1 SWR thus removing the MFJ 1788 from the problem. Next I bypassed the LDG antenna switch and low and behold the SWR now was 1.1:1 and me saying thank god it was not my K3! So it would seem the LDG  antenna switch is the problem so I took the switch cover off and looked around. I cleaned the SO-239 connectors, check the internal connections and all seemed to be great. The only problem spot to me could be the switching relays with internal contact troubles? After exercising the relays the trouble in the LDG antenna switch seemed to be ok. If the trouble comes back this is a 4 position switch and I only use 2 positions I could swap out relays and look at ordering all new relays. At this point all seems to be working well but stay tuned to see if relay swapping and ordering is in the near future.